An introduction to the Stoics

My introduction to Stoicism happened very slowly – one quote from Seneca or Epictetus at a time. And then it was very fast, and I found myself reading about Stoic philosophy nonstop.

Stoic philosophy offered to me what religion could not – an operating system for this life without any promises of an afterlife, no relationship with a friend up in the sky, no leaps of faith required. Just a very logical and practical way to approach life. This works great for me. If you are religious, Stoicism doesn’t compete with any religious teachings and only complements them with insights on the human psyche.

Before we dive in, let’s talk about Stoic philosophy and the Stoics.

Philosophy in its literal translation from ancient Greek is love of wisdom. To me, philosophy is a thinking framework; a framework full of interconnected mental models.

But Stoicism has gotten a bad rap (it needs a better PR agent). It is a common perception that to be a Stoic is to have as much emotion as the ancient marble statues that commemorate Stoicism’s founders. A common definition of the word “stoic” is someone who experiences no feelings of pain, pleasure, joy, or grief.

Dear reader, you may not know me well, but I am volcano of feelings. A philosophy that advocates having no feelings would not work for me. Though that may be a definition of the word, that is not what Stoicism – the philosophy – is. Stoicism seeks to minimize unnecessary negative emotions, which in turn amplifies positive emotions.

The less your mind is preoccupied with unnecessary negative emotions, the more room it has for positive ones. No, I am not going to turn into a Greek marble statue by the time I am done writing this, and neither will you by the time you finish reading.

Nassim Nicholas Taleb put it so well: “A Stoic is someone who transforms fear into prudence, pain into transformation, mistakes into initiation, and desire into undertaking.”

Stoicism was started in ancient Greece in around 300 BC by Zeno, a wealthy merchant who lost all his wealth in a shipwreck and barely made it out alive himself.

Throughout this book I constantly make this point: Pain often unlocks creativity. It must have been a devastatingly painful experience for Zeno to lose everything overnight. Nevertheless, he later wrote: “My most profitable journey began on the day I was shipwrecked and lost my entire fortune.”

For a while Zeno’s philosophy was called Zenoism; but maybe because

Zeno did not want it to become a cult of Zeno, he named it after a place in Athens where he and his students gathered, the Stoa Poikile (“painted porch”). A few millennia later, this tradition was borrowed by the hedge fund industry in the US, which named their companies after places where the founders grew up, had their first kiss, etc.

Three Stoics whose writings have survived to this day are Epictetus, Seneca, and Marcus Aurelius (I’ll refer to him as Marcus for brevity; yes, we are on a first-name basis). It is through the eyes of these three Stoic giants that we see Stoicism today.

I want to warn you, I’ll be quoting them extensively in these pages. There is so much beauty, clarity, and wisdom in their original writings, and I want to bring you as close to the source as possible.

As I’ve been reading books by and about these great men, I have been shocked at how little people have changed over last 2000-plus years.

Let’s start with Epictetus (50–135 AD). We don’t know much about him, other than that he was a slave. Epictetus was not even his real name – it translates from ancient Greek as “acquired.” In his late teens, he was granted his freedom and proceeded to teach philosophy. Epictetus did not leave any writings behind. Luckily, his lectures were transcribed by his student Arrian into a series of eight books, titled Discourses, of which only four have survived. Epictetus’s dichotomy of control framework is so simple yet so brilliant (we’ll discuss it soon).

And then there is Marcus Aurelius (121–180 AD) – a Roman emperor, a general, a philosopher, and a practicing Stoic. He was the one who impressed me the most.

Let me clarify this. It is not his status as emperor that impressed me, but the fact that while being an emperor he remained a good human being. If you want to destroy a person, give him absolute power and unlimited wealth. History is littered with rulers destroyed by power and money. Marcus is a rare exception. Just imagine the Roman Empire in the second century AD. It controls every territory that touches the Mediterranean Sea. Marcus’s word is law. He can have anything he wants. He could have taken shortcuts through life. But he did not.

During his 19 years of ruling the Roman Empire, Marcus did not abuse his power; he governed with justice and civility. He promised that he would not prosecute any of his political opponents, and he kept that promise.

The only piece of writing Marcus left us is his private journal, which he called Meditations. This journal was written not to be published but for Marcus to privately reflect on his life.

He wrote, “Waste no more time arguing about what a good man should be. Be one.” And, “Never esteem anything as of advantage to you that will make you break your word or lose your self-respect.” And, “A man’s worth is no greater than the worth of his ambitions.”

Seneca, to whom we shall turn next, remarked, “No man was ever wise by chance.” Marcus was no accidental genius but a person who applied Stoicism to all aspects of his life and carefully cultivated, through deliberate practice, the person he became.

All that said, Marcus lived 2000 years ago, and we’ll never really know if the image I painted above is overidealized or not. Epictetus said, “Imagine for yourself a character, a model personality, whose example you determine to follow, in private as well as in public.” To me, Marcus is the “personality” I am trying to become, knowing that it’s unlikely I’ll ever get there. However, just constantly striving to be more like Marcus will elevate my life.

And finally, there is the Spanish-born Lucius Annaeus Seneca (5 BC–65 AD), or just Seneca. A true Renaissance man (15 centuries before the Renaissance), in addition to being a philosopher, Seneca was an investment banker, a playwright and writer, a senator, and advisor to Roman emperor Nero. Seneca was the most prolific writer of the three.

Seneca’s wisdom is often stunning in its simplicity. My favorite quote from

Seneca is only three words long: “Time discovers truth.” It epitomizes a lot of things in life, for instance, it slices to the core of what investing is. As an investor, my goal is to discover the truth (what a company is worth) before time does.

If you keep this quote in the back of your mind when you have a conversation or debate with someone, the objective of the conversation may change from one ego prevailing over another to a search for truth. After all, eventually time will discover the truth. And if the conversation doesn’t change your mind, maybe you shouldn’t have the conversation. What’s the point? (Read more about intellectually honest debate in “Abracadabra.”)

Seneca is the most controversial of our three Stoics – he’s full of contradictions.

He writes that wealth must be acquired in an ethical way. Here is the first contradiction: Seneca became one of the richest men in Rome at the service of the truly evil Emperor Nero, who assassinated his own mother and later ordered Seneca to kill himself. We don’t know Seneca’s true intentions. Nero was a despot, but Seneca may have felt it was his civic duty to provide him guidance for the benefit of Rome and its citizens. We do know that Seneca acquired a lot of his wealth by serving Nero.

Here is another contradiction. Seneca wrote, “Wealth is the slave of a wise man. The master of a fool.” And, “He is a great man who uses clay dishes as if they were silver, but he is equally great who uses silver as if it were clay.” It seems that at times Seneca was a slave to his own wealth, as he obsessed over material things – the high polish of his furniture, his exotic slaves, the age of the wine he drank, and the earrings he sported.

Seneca epitomizes the saying, “In theory there is no difference between theory and practice; in practice, there is” (which has been ascribed to that great American philosopher Yogi Berra). Seneca literally wrote books on the theory of Stoicism but often struggled to practice that theory. He self-admittedly did not live up to his own ideals. If you’re listening for notes of judgment on my part here, there are none. Quite the opposite. Seneca’s struggles make me appreciate that though theory is a prerequisite, it is not enough; success comes from practice.

In other words, my spilling of ink on these pages means absolutely nothing for me (other than that you are reading it) if I don’t practice Stoicism every day. There is an Asian proverb: “Knowing and not doing is not knowing!” Therefore, my goal is to be a practicing Stoic who both knows and does.

This is a free
chapter from: 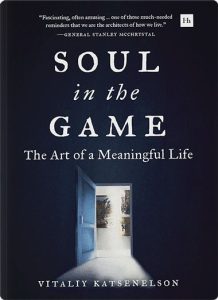 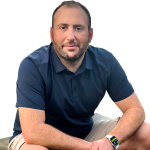 Dubbed “the new Benjamin Graham” by Forbes, Vitaliy is the CEO of a value investing firm, author of several books, and a prolific writer on topics as diverse as investing, parenting, classical music, and self-improvement. You can read his articles at ContrarianEdge.com or listen to them on his podcast, Investor.fm.

This is a free chapter from:

Step 1: Order your copy of Soul in the Game