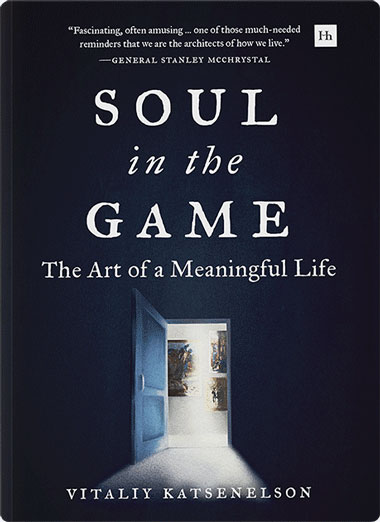 Author, All the Presidents Men

Step 1: Order your copy of Soul in the Game

Wow! This is surprisingly good. Honestly I was suspicious (why should I listen to a money guy talk about life?) but I liked it a lot! Vitaliy brings an insightful, fresh perspective to the question of how to live life. He is caring and considerate, with a really engaging writing style.

Author, How To Live

Soul in the Game is a book of inspiring stories and hardwon lessons on how to live a meaningful life, crafted by investor and writer Vitaliy Katsenelson. Drawing from the lives of classical composers, ancient Stoics, and contemporary thinkers, Katsenelson weaves together a tapestry of practical wisdom that has helped him overcome his greatest challenges: in work, family, identity, health – and in dealing with success, failure, and more.

Part autobiography, part philosophy, part creativity manual, Soul in the Game is a unique and vulnerable exploration of what works, and what doesn’t, in the attempt to shape a fulfilling and happy life. 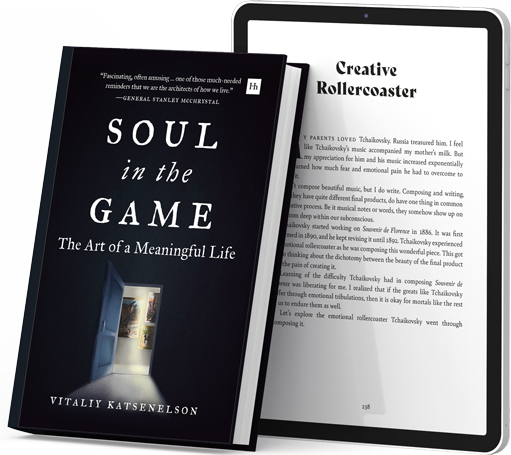 A fascinating, often amusing, occasionally jarring journey – just like life itself. Vitaliy Katsenelson’s Soul in the Game is one of those much-needed reminders that although we have no control over when we’re born or when we’ll die, we are the architects of how we live. 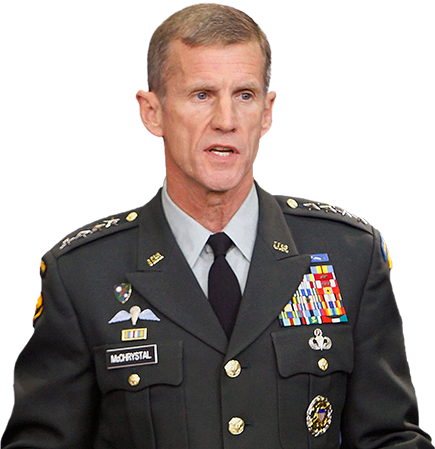 I vividly remember the moment when I decided to write this book. Now, looking back at it, I am very proud of this moment as it was a completely selfless one.

Let me tell you what happened. It was early in the morning of August 10th, 2020. I had just finished writing an essay. At the time I didn’t have a title for it, but in the book it’s called “Creative Rollercoaster”.

This essay started out as a short note about Tchaikovsky’s Souvenir de Florence that was going to accompany one of my investment articles. As I started reading about this piece, I was touched by the emotional rollercoaster Tchaikovsky suffered when he composed it. I caught myself thinking that Tchaikovsky’s emotional journey looked very familiar. I don’t compose music, but I write. Both are creative processes where you try to fish content out of your subconscious. What started as a short piece that was going to accompany music started to turn into a lengthy essay about creativity and writing. After I finished writing it, I realized that this essay could actually help others. But this was not the only life (non-investment) essay I had written. What if I put the life essays I had written over the last fifteen years into a book? This selfless thought “it could help others” is the one I am proud of.

I started looking through my essays. I was going to self-publish them. Nine days later I received an email from Craig Pearce, an editor at Harriman House, a British publisher that had published books by my friends Lawrence Cunningham and Morgan Housel. Craig and I had communicated a few years earlier about possibly publishing an investment book I was working on, Intellectual Investor. (I have yet to finish it.)

I told Craig that I was working on a very different book and sent him a sample. I was expecting a very polite (he is British, after all) response along the lines of “Vitaliy, this looks great. Good luck!” To my surprise, Harriman House expressed interest in publishing it. Now I was a bit confused. I started to question their sanity. I thought there must be something wrong with them. What kind of joint could they be running if they wanted to publish this?

I reached out to Lawrence and Morgan and asked them about their experience with Harriman House. Harriman House had just published Morgan’s Psychology of Money, which became an international bestseller and quite deservingly sold a million copies. Both gave Harriman House glowing reviews and confirmed that there was nothing wrong with either Craig or the publisher.

I was excited to get the book out into the world, and we agreed to a publishing date of March 2021. We were in the middle of the lockdown, so I had plenty of time on my hands. I worked mornings, evenings, and weekends on the book. At first, I was mostly rewriting existing published and unpublished essays. Then the writer in me took over and I wrote many new ones.

Everything was going according to plan, and then…

Well, I stumbled on Stoicism. It was love at first sight. I wanted to learn and to write about it and share it with the world. I told Craig that this detour might take a few months. I read everything I could get my hands on. This ended up delaying the book by about a year, but I don’t regret it. I ended up writing a book inside a book about Stoic philosophy.

Soul in the Game – The Art of a Meaningful Life ended up being a very personal and autobiographical book. But I truly hope that despite its being personal, Soul in the Game becomes not my but your book. I can only hope that I carried the selfless intention that triggered me to write it throughout the book.

I am finally directly impacted by the pandemic. Normally it takes four weeks to do a print run of a book. Thanks to Covid, and for reasons that are still unclear to me, it now takes four months. If the hardback sells out in June it will take until September to get new copies printed.

That’s why I strongly encourage you to order it now – otherwise you may need to wait until September.

Plus, if you order and send your confirmation to bonus@soulinthegame.net, I’ll send you four entirely new chapters (25 pages of content) to read now.

Nothing less than a manual on how to live a good and meaningful life and achieve those most elusive and yet desirable of all states: balance and selfmastery. This book has changed me, and it will change you as well.

Composer and Author,
How to Listen to Great Music

Vitaliy has captured much of the awe I hold for composer creators and he uses that insight to offer positive, constructive steps for us today who want to live life to the fullest.

Vitaliy Katsenelson’s engagingly readable life-a-log, Soul in the Game, parses so many spirits it will benefit most everyone. Wisdom, life-long learning, human capital, struggles, music composers, immigrant life, philosophy, family life, stoicism and so much more—presents for everyone in 76 enjoyable bite sized bursts. Have fun!

Superb guidance on how to unravel what’s really important in life. There’s a gem of wisdom in each short, snappy chapter.

Professor of Finance, Wharton School, and Author, Stocks for the Long Run

Touching, honest and insightful—it’s hard to put this down

Author,
The Psychology of Money

Part eclectic autobiography of a diverse life, part endorsement of critical thinking, part investing principles, and part how-to guide on how to be a complete human. Soul in the Game is always interesting, often funny, and at times profound. 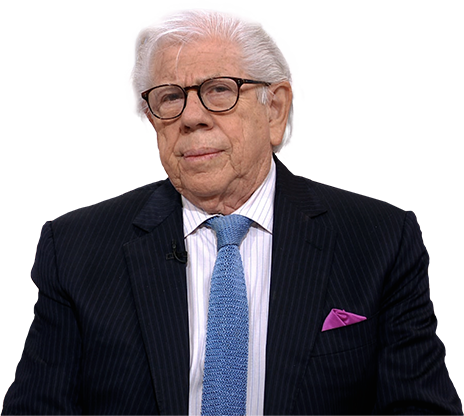 Vitaliy Katsenelson has been singled out by financial media for his brilliant investment strategies, but perhaps even more impressive are his philosophical writings. Soul in the Game is no ordinary self-help tome. I’ve never read anything quite like it: a collection of wonderful observations and insights about Vitaliy’s native Russia (he emigrated to the US in the 1990s), parenting, living one day at a time, and – especially – creativity: in business, classical music, and art. Vitaliy’s life is an integrated one, from which we can all draw some surprising and (like his investment approach) contrarian notions. This book is worth anyone’s time.

Author, All the President’s Men

Vitaliy Katsenelson was born in Murmansk, USSR, and immigrated to the United States with his family in 1991. After joining Denver-based value investment firm IMA in 1997, Vitaliy became Chief Investment Officer in 2007, and CEO in 2012. Vitaliy has written two books on investing and is an award-winning writer. Known for his uncommon common sense, Forbes Magazine called him “The New Benjamin Graham.”

He’s written for publications including Financial Times, Barron’s, Institutional Investor and Foreign Policy. His articles are also published on his website, ContrarianEdge, and in audio format on his Intellectual Investor Podcast. Vitaliy lives in Denver with his wife and three kids, where he loves to read, listen to classical music, play chess, and write about life, investing, and music. Soul in the Game is his third book, and first noninvesting book. 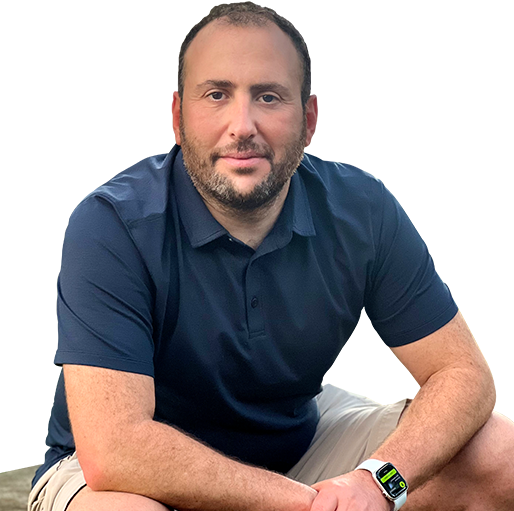 Soul in the Game is a wonderful compilation of cogent observations and life strategies, derived from the author’s unique personal journey. From classical music to the Classics themselves, Vitaliy Katsenelson both educates and inspires.

A rare read worth relishing. Taking threads from markets, music, art, philosophy, personal history, and universal humanity, Vitaliy weaves a tapestry worthy of kings and teaches us how to “go long” the scarcest asset of all: making meaning.

Vitaliy Katsenelson’s craft is investing, his art is writing and his passion is to live a meaningful life. All are abundantly in evidence in Soul in the Game. Part memoir, part meditation, part self-help, with mini courses on Stoic philosophy and classical music, this book is personal, quirky, and marvelous. Invest some time with Vitaliy and you will be richer for it.

A wise and irreverent narrative, replete with humor, life lessons and philosophical insights, which amply demonstrates that being a successful investor and a compelling writer are not mutually exclusive.

Introduction – How to Read This Book

One Day at a Time

Stoicism – The Philosophy for Life

The Art of a Meaningful Life

Author, The Art of Thinking Clearly

The best investment you can make is an investment in yourself and in your
relationships. Vitaliy’s book is a big step forward in that direction. A must read!

Katsenelson is a learning machine. You will be inspired. Congratulations Vitaliy on your latest (and best) book.

Author, The Education of a Value Investor

Vitaliy Katsenelson’s book is a delight to read and contains a great deal of sound advice, including some nice tips on applying Stoicism in daily life.

I thought it would take me a week to read the book, but when I started I could not stop and finished it in a day! After reading, I feel like I have spent one day of my life together with Vitaliy conversing with him through his warm words. His writing style is entertaining and at the same time it engages with the mind of the reader, making you think deeply about your own life. In every chapter, in every sentence and word, you can feel Vitaliy really put his SOUL into it.

Héctor García
Bestselling Author, IKIGAI and A Geek in Japan

Get Vitaliy’s weekly
reflections on investing,
life, and classical music
in your inbox